Tacha Gets Slammed For Taking A Swipe At Influencers

Controversial reality TV star Tacha was yesterday berated on Twitter after she took a swipe at influencers who can’t write correctly. The brand influencer, in a bid to shade her colleagues who can’t spell correctly, shared a short tweet with a laughing emoji directed at them.

Her moment of fame was cut short after she received a reply from a tweep who quickly reminded her of a wrong spelling she wrote on an artwork she created while in the Big Brother house.

The self-acclaimed “Port Harcourt first daugter’s” design got the attention of social media and people were amused that the reality tv star who holds herself in high esteem has a problem with spelling her favourite phrase.

See the exchange below: 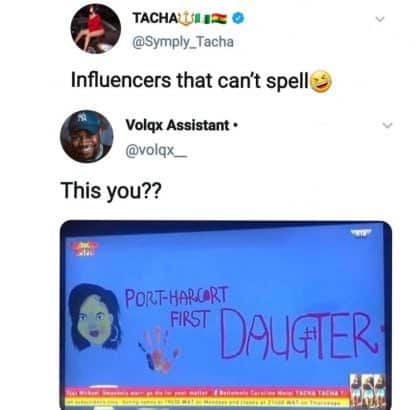