I Am The Best Since Fela Kuti – Burna Boy 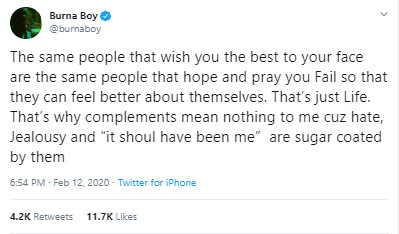 “FACT! I always knew I was and I am THE BEST. Everyone you think is the best KNOWS I’m BEST since Fela Kuti. But @timayatimaya told me something a long time ago that made me not care about being the best. “The World can do without the Best” the world will still spin regardless.” 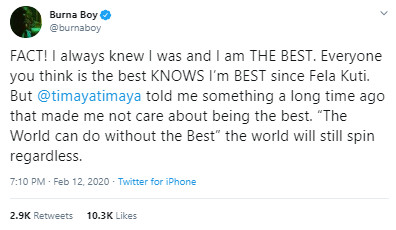 In a two-tweet tirade, he wrote, “The same people that wish you the best to your face are the same people that hope and pray you Fail so that they can feel better about themselves. That’s just Life. That’s why complements mean nothing to me cuz hate, Jealousy and “it shoul have been me” are sugar coated by them. 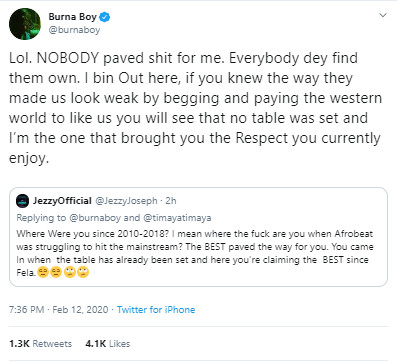 Then a fan replied Burna Boy that, “Where were you since 2010-2018? I mean where the f**k are you when Afrobeat was struggling to hit the mainstream? The BEST paved the way for you. You came In when the table has already been set and here you’re claiming the BEST since Fela.”

Burna then replied with a sledgehammer of words, “NOBODY paved shit for me. Everybody dey find them own. I bin Out here, if you knew the way they made us look weak by begging and paying the western world to like us you will see that no table was set and I’m the one that brought you the Respect you currently enjoy.”

Since then, opinions have been split on Twitter. The elusive issue has also been deciphering the exact person Burna Boy addressed in the first tweet.