Popular Nigerian rapper Olamide Adedeji professionally known as Olamide, recently debuted a new look on his official Instagram page. Over the past couple of years, the rapper had been known to rock a signature dreadlocks hairstyle that took on different styles depending on the look the rapper was aiming for. However, this time around, Olamide did not just revamp his dreadlocks but completely took them out.

The Woske crooner showed off his new appearance in a Boomerang clip posted on his page. Olamide was seen with his head cleanly shaven. It seems the rapper is now more at home with a ‘skodo’ themed look.

In the clip posted by him, he was seen taking off his face-cap and putting it back on. Perhaps, this is an indication that the entertainer is not yet confident enough to openly flaunt the new hairstyle.

Check out the clip below:

Among those that were spotted commenting on the new look is music executive and owner of Mavin Records, Don Jazzy.

The record label boss who is much known for rocking a similar look welcomed Olamide into the ‘gorimakpa’ club.

Read what other Colleagues, followers and fans had to say:

bojonthemicrophone: “We are twins now!” 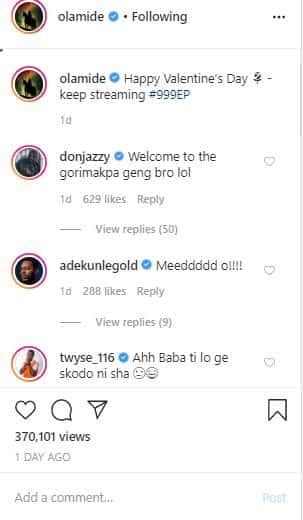