Casualties of the Ikoyi/VI Clean Up

The Special Committee on the Clean-Up of Ikoyi and VIctoria Island said that it had impounded 215 vehicles, arrested and prosecuted 98 persons for various sundry environmental offences commencement of the exercise. The State Commissioner for the Environment and Water Resources, Mr Tunji Bello, said this in a statement made available to newsmen by the Director, Public Affairs of the ministry, Mr Kunle Adeshina, in Lagos on Sunday.

Bello said that the vehicles were impounded from various areas in Ikoyi and on Victory Island for parking in prohibited zones and mechanic workshops located in unauthorised places. 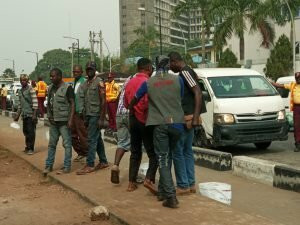 He said that those arrested include street traders who displayed their wares on walkways, road setbacks, those operating illegal car wash centres and automobile mechanics who had converted public spaces to mechanic workshops.

Bello said that others arrested were drivers of contravened vehicles who resisted the impoundment of their vehicles.

He said that the offenders were arraigned before mobile courts which sat at the Safety Arena Mobile Court in Oshodi and another mobile court which sat on Victoria Island.

He said that during one of the several raids, the courts handed out sentences which included fines to the offenders.

The commissioner also said that various goods were seized during the clean-up.

He said that those that were perishable were immediately sent to the various orphanages and motherless babies homes spread across the state by the Lagos State Environmental Sanitation Corps (LAGESC).

He said that non- perishable items were being kept at the agency’s store at Oshodi pending when a decision would be taken on them.

The commissioner who is also the Chairman, Special Committee on the Clean-Up of Ikoyi and Victoria Island, said that committee commenced its exercise on Jan. 10.

He said that it comprised the operatives of the State Task Force on Environmental and Special Offences.

” They have also been ejecting occupants of abandoned buildings, and other types of buildings serving as hiding places for okada riders and street traders, many of whom usually seek refuge in them when raids are carried out,” he said.

He said that the committee, however, warned liaison offices, whose buildings were serving as hiding places for street traders, okada riders to desist from such or face its dire consequences.

He warned that if the practice continued, the committee would compile the list of such abandoned offices, publish it and may advise the state government to take legal actions to acquire such buildings.

Bello added that the committee would intensify the clean-up campaign until complete sanity had been restored to all the areas of Ikoyi and on Victoria Island.

He listed some of the streets were the clean- up committee had operated and cleared shanties, structures on Drainage setbacks, street traders and roadside mechanics, and cart pushers.

The statement also quoted the Director of Operations, Mr Ayo Williams, to have said that the clean -up committee was determined to force a relocation for all street traders and owners and occupiers of shanties and illegal structures in Ikoyi and Victoria Island.

Williams also the Senior Special Special Assistant to the Governor in Waste Monitoring said that the officers seized wares of those involved in street tradings, dismantling the structures and prosecuting those arrested on a daily basis.

He said that the committee, however, warned liaison offices, whose buildings were serving as hiding places for street traders, okada riders of dire consequences