Charly boy has slammed Anambra state Governor, Willie Obiano in an Instagram post he made two hows ago. The area father accused the Governor of not interested in youth oriented programs and ‘insulted’ him for always bragging about his achievements,

He also said the Governor was more interested in his female workers than interesting state matters he was proposing to him. Behold Charlyboy’s undiluted words;

Willy is loud, most times pompous and braggadocios. His own possen no be here. I went to him a few times since he became governor to know what we can do with the youths in Anambra state and Infact Igbo land, but Willy wasn’t so intrested in working with us. He bragged of how he has all areas covered and seemed more intrested in my female workers than the buisness of the youths. Willy like nyash no be here.

I stopped calling or reaching out to him, because our meetings no dey yield any action for the street people. So I just give am long rope, as an Emperor concern. You can imagine my surprise when I was called by Willy all the way from Rome. As usual, e no waste time to start to blow his trumpet again. He was excited as he bored me shitless with the story of his knighthood by the Pope. In his words, it is to be the highest honor bestowed on an African he claimed. Haba, Willy, which kin lie be dat naa?
Justice Oputa received his knighthood from the Pope too, and guess what? the gentleman didn’t lobby for it sam sam.
I GET MANY GIST ABOUT WILLY,”

He then proceeded under the comment section to continue:

”Willy is working, oh Yesooooo.
Working the pockets of Anambrarians?
All of them na the same thing. Do as you like people,
people whose ego are bigger than Nigeria.
Willy use to be one of the boys in my class in secondary school, ckc onitsha, to be precise. Then he was this boy trying to fit in, a nerd if you like.
He was my neighbor in Gbagada while working as an ED in fedelity bank. We visited each other a lot then. We were sort of family friends. He knew how to trow a party where he can feel very KINGLY. Willy was and still is a fun kinda person, gbedu Guy, a party freak, a show man, Willy willy.” 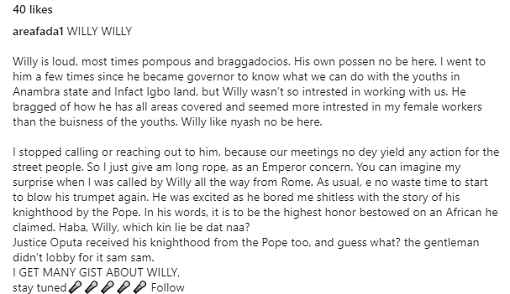 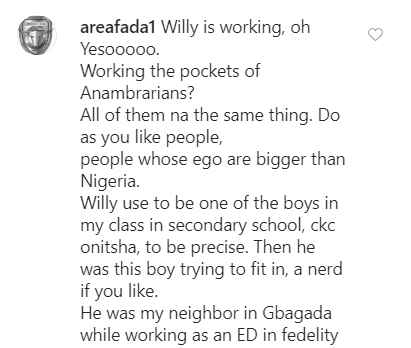