The Ogun Commissioner of Police, Kenneth Ebrimson, stated this on Sunday at the Ifo Divisional Police Station where he paraded the suspects. The News Agency of Nigeria (NAN) reports that the high point of the crisis occurred on April 4, as many residents fled for their lives and others lost possessions in the mayhem.

Ebrimson, however, refuted claims that armed robbers hijacked the crisis, adding that “there was no report or complaint of robbery made to the command by anyone from the troubled areas”

Some of the suspected cultists terrorising the Ifo and Sango-Ota areas of Ogun state. [@mr_adunbarin]

The CP described the incident as “a case of cult clashes among seven rival groups within the areas as a result of the recent death of one of the members.”

He explained that the command swung into action immediately it received the information and had since effected arrests in connection with the incident.

“We deployed our men from the Special Anti-Robbery Squad, Anti-Cultism unit, Anti-Kidnapping unit, the Special Forces and conventional policemen drawn from the Ifo and Ota area commands.

“Our men smoked the suspected criminals out of their hideouts and recovered various weapons. 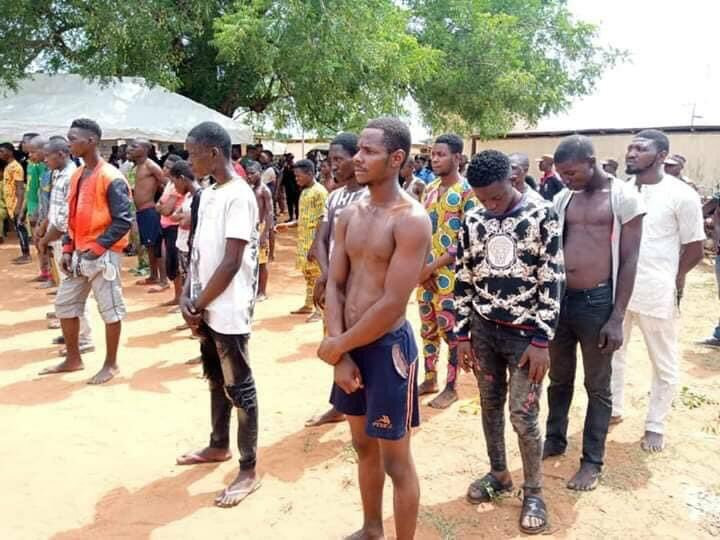 “It all started on April 4 as a reprisal attack on other rival cult groups from a cult group which had earlier lost a member.

“I want to say that there was no single case of armed robbery or any case of kidnapping that has been reported to us.

“The basic issue is cultism that emanated from the killing of one of them in Ifo and spread to Sango, Ijoko and Agbado areas,” he said.