Liverpool Ends Their Loosing Streak With A Win Against Bournemouth

Goals from Mohamed Salah and Sadio Mane helped Liverpool comeback against relegation-threatened Bournemouth to return to winning ways and move to within three wins of their first Premier League title. Salah’s 80th goal on his 100th Premier League appearance made him the first Liverpool player since Michael Owen in 2002-03 to score 20-plus goals in three successive seasons while Sadio Mane’s coolly-taken effort turned around Bournemouth’s controversial early lead, given to them by Callum Wilson.

Salah’s strike, his 16th in the league this season, also took him past Luis Suarez as the club’s leading overseas scorer in the top flight.

The win ended a run of three defeats in four matches in all competitions and was the ideal morale-booster before Wednesday’s pivotal Champions League last-16 tie at home to Atletico Madrid, in which they trail 1-0 after the first leg.

Liverpool’s bright start belied their recent difficulties but somehow they still went behind. 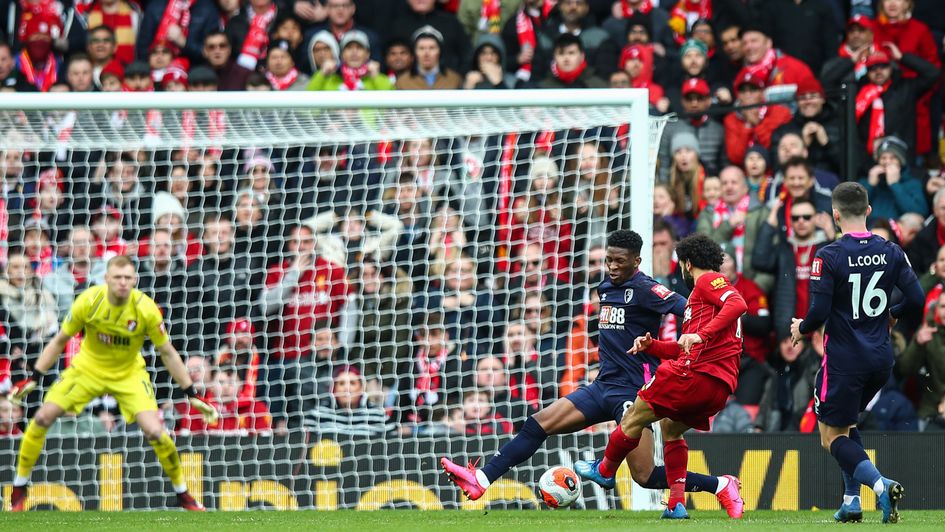 On this occasion, however, Klopp got the desired response which was missing against Atletico, Watford and Chelsea.

There was more than a whiff of a foul when Wilson appeared to shove Joe Gomez, who he targeted physically all game, but referee Paul Tierney started as he was to go on and allowed play to continue.

That ultimately resulted in Jefferson Lerma crossing for Wilson to sidefoot home, and when VAR did not come to Liverpool’s salvation Klopp was apoplectic.

It was the fourth time in the last five matches his side had conceded the first goal, having not gone behind in the previous 14 – excluding the youth team’s League Cup defeat at Aston Villa.

With an unexpected lead Bournemouth sought to capitalise and Nathan Ake’s header was pushed onto the crossbar by Adrian.

Unlike in previous weeks, Liverpool found a response and turned the match around in an eight-minute spell.

An injury to centre-back Steve Cook had a hugely disruptive effect on the visitors as his replacement Jack Simpson was like a rabbit caught in the headlights as he dithered before trying to dribble past Mane just 15 yards outside his own penalty area.

The Senegalese forward easily nicked the ball, and while his pass to Salah was behind his team-mate and left him with more to do than he would have liked, the Egyptian quickly recovered control to tuck a shot inside Aaron Ramsdale’s left-hand post.

It was Salah’s eight goal in six appearances against the Cherries, scoring in every game, his 14th in as many Premier League matches at Anfield and ended Liverpool’s longest goal drought (124 minutes) since February 2019.

Mane put them ahead when Virgil Van Dijk’s interception and through-ball sent the unmarked Mane clear bend a shot past Ramsdale, and James Milner should have made it three but his cushioned shot from Salah’s cross carried neither the weight nor direction to trouble the goalkeeper.

Further, Milner intervention in front of that same goal, albeit in the second half, prevented his side conceding an equaliser as Ryan Fraser’s lob over Adrian was certain to go in until the 34-year-old midfielder, playing at left-back after Andy Robertson was rested as a precaution, raced back to clear two yards out.

With Liverpool only threatening in fits and spurts, Mane’s first-time shot from 30 yards deserved a goal but rebounded back off the angle, while Ramsdale’s fingertips kept out Salah’s near-post effort.

Klopp sending a message to his players by furiously jabbing his temples with both index fingers showed how conscious he was of the need to see out the final 10 minutes.

The return of Klopp’s three fist pumps to the Kop – and then again to the Main Stand – was a release of his pent-up frustration as much as a celebration.

By contrast, Bournemouth manager Eddie Howe trudged down the tunnel after a ninth defeat in 10 away games, a run of just three victories in 18 league matches leaving them stuck in 18th and in real danger of being relegated.